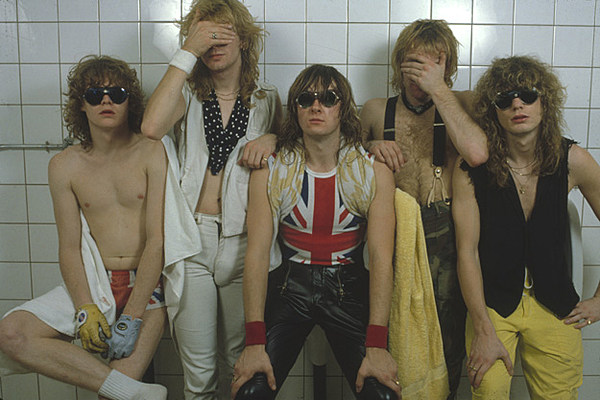 A building in flames through the scope of a powerful weapon… A scene from the past or from the future? It is left to the imagination of the kid holding in his hand the third albums of Def Leppard. The message is clear though: get ready to get your ears washed by some mean 80’s hard rock with just enough pop to make it the huge success it became.

Pyromania is such a special piece to me. First of all, it is one of the first true hard rock album I got the chance to hear. When I landed my eyes on the vinyl jacket, I knew I found something special. I thought I had arrived, it was what I have been looking for for a long time. Just looking at the verso of the album reinforced my impression. The pictures of the band made them look like they were the real deal, even if unbeknownst to me they were barely 22 at that point. They even had nicknames for themselves or they direct entourage. Steve “Steamin'” Clark, “The Leppardettes”, how cool was that? I actually thought in my naïveté they had their own female backup singers… Disillusion knocked at my door years later when I realized the band where doing all the vocals.

The quality music had to match the strength of the album design and it did not disappoint. A killer opening track left place to the obvious single while my head was getting blown off by the power of the sound of “Mutt” Lange production. Seriously, in terms of kick-ass, yet smooth guitar sound, the renowned producer is a genius, appealing to both hard rock fans and mainstream audience. The third track “Stagefright” has remained one of my all time Leppard favorite as it transmits the urgency and the adrenaline rush provided by stage. Same with “Die Hard The Hunter” which evokes the trauma of the returning soldier from a war where he lost his sanity. As the spectre of Vietnam planes all over this song, the listener puts itself in the shoes of the returning hero with “blood in his eyes”, ready to blow his entire neighborhood.  The anthem “Rock of Ages” comes next and proves the Sheffield quintet can deliver a fun hymn while pledging their allegiance to Rock’n Roll. Last, a few words on “Billy’s Got A Gun” who is for me an hidden treasure since featured at the very end of the record. The infectious riff of Mr. Clark and Willis (who co-wrote the song before being ousted) translates the anguish of a soon to be murder witness, imploring “Billy” to come back to reason. Danger, excitement, unpredictability are the main elements that make this song an absolute killer tune. As Joe Elliot pronounce the final “Bang, Bang!”, the listener remains in awe and still has to take in Rick Allen’s final assault on his (largely triggered) drum kit.

Pyromania is special to not only to the generation who saw his release but also to many music fans interested in the broad hard rock/metal genre.  A masterpiece who dropped at the right time and knocked the door open for a few other artists to try their luck by polishing their sound with more or less success. A Definitive must have !